Artspace showcases the work of contemporary artists from New Haven and beyond, and makes art accessible to the whole community.

January 17–April 17 [2004]: Artspace Lounge. “what haunts…” An interactive installation that explores secrets, their universality and how powerful they can be. Read others’ secrets and contribute your own anonymously.

January 17–February 28 [2004]: Flatfile. Erin Anfinson, Chloe Atreya, Elise Kaufman, Robert Knight, Nicky Santore, Jessica Schwind, Joseph Smolinski and Virginia Zimmerman. The Flatfile includes over 300 works on paper by area artists. These works are available for purchase. To view samples visit www.artspacenh.org/flatfile. Also see examples of the Flatfile in the window of 220 College Street, 3 blocks away on the corner of Crown and College.

For more information on events, please come inside.

Artspace’s exhibition programs are made possible from proceeds of the annual gala benefit auction, from a rent grant from the City of New Haven, and from contributions from individual Friends, and the board of Artspace. We thank the Connecticut Commission on the Arts and the Community Foundation of Greater New Haven for their support of our family and community programs.

Featured Artist: Joan Gardner. The flatfile includes over 300 works on paper by area artists. These works are available for purchase. Visit www.artspacenh.org/flatfile to view samples.

The members of the Teen Docent. Program will offer tours on December 13 and 14 [2003] at 2:00 pm. The Artspace Teen Docents are supported in part by the Community Foundation of Greater New Haven. 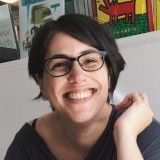